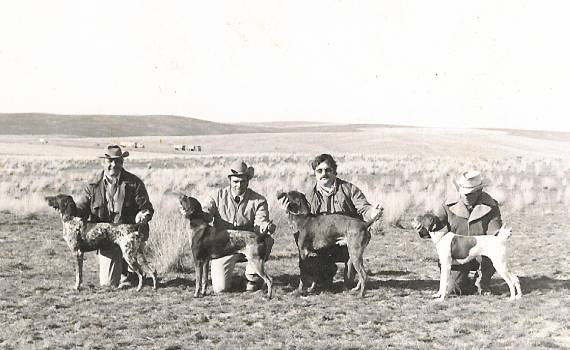 Two Hall of Fame, GSP Club of America, GSP of WA members start this picture off. Left, is R. L. (Bob) Holcomb, professional gundog trainer and importer of Radbach and Grief lines. Bob was stationed in Germany after W.W. Two and sent some very good German dogs to his clients in California and Washington. These dog’s genetics are still having an impact on breeding in the United States. Bob was a first rank trainer and breeder, finishing nearly one hundred dogs in his career. Second from left is Dave McGinnis, legendary All Age trainer and handler, Dave won a number of National Championships, three with Patricia Von Frulord, owned by Dr. Fred and Gladys Laird, one with a Patricia son, Frulord’s Tim also owned by the Lairds, one with Erlicher’s Abe, owned by Linda Cross of Idaho, and several others. Dave was always in the money and at times was unbeatable. Third from left is current member Bob Johnston, trainer and handler of many Field Champions, including a few of his own. See some of his accomplishments under our section “Titled dogs”. Bob is currently a GSPC of Wa. board member and is campaigning his personal dog Cree, looking for yet another Field Champion title. Far right is Walter Epps. As a member of the German Shorthair Club of Washington, he also made his impact on the Field Trial circuit as he trained, finished and competed a number of top flight dogs in this region. 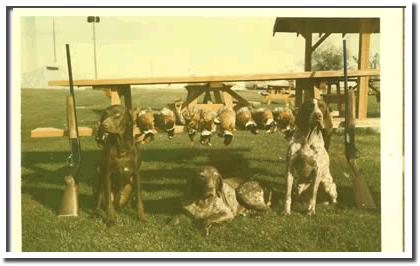 Hunting is good outside of Othello circa 1967. Linda Zobbi’s dogs from left to right; Velvet, Heidi and Tuesday